On Tuesday 12 October, we were delighted to host our fourth ‘Inspiring Women and Girls In STEAM’ event, in celebration of Ada Lovelace Day, in partnership with Engine Shed. 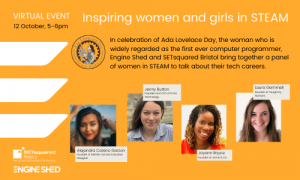 Ada Lovelace, a 19th century mathematician, is widely credited as the first computer programmer, and best known for her work with Charles Babbage to develop the ‘Analytical Engine’ computer.

The virtual event saw a diverse audience, including primary and secondary school students and teachers, come together to listen to a panel of women in STEAM talk, all of whom have founded their own companies at an early stage in their careers.

The panel were asked questions ranging from ‘who were your role models growing up?’ to ‘how do you build a network of people around you’? They took time to reflect on their experiences at school, and what advice they would give school students watching. Jenny talked about widening career options to more than just the ones given at school: “there are so many options that aren’t on the [school careers’] list… anything in your imagination is probably a possibility at some point in the future”. 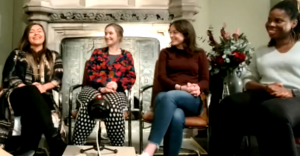 All panel members had previously worked for large companies, where they had spotted either gaps in the market or realised that there was a better way to solve particular problems. They then took the courageous leap to set up their own companies to run things differently. Alejandra, for example, explained how she noticed that the people around her at university “had so much potential that they wanted to grow, but also that they had so much to give”, and built her company around knowledge sharing.

When discussing networking and growing a list of contacts, Laura advised trying different types of networking events and opportunities: “you’re not going to fit in in loads of places, and that’s okay, but when you do find the one you fit into then that’s what will help you grow”. The panel also discussed some of the difficulties women currently face working in the tech industry, Joyann gave an important piece of advice to remember: “whatever background you come from, you are always going to have some knowledge, experience, ideas or solutions that no one else in the room has”.

Lorraine Fairbanks, Engine Shed Partnerships Manager said: “We always enjoy hearing from fantastic inspiring women on our Ada Lovelace Day panels. This year was a mix of people connected to us through SETsquared Bristol and new to our networks. The overarching message for me was to go and try everything, and that we have it within us to solve anything. I encourage you to watch the talk and be inspired as I have by this event.”

You can watch a recording of the talk here.

To find out more about SETsquared projects and events, sign up to receive the monthly newsletter.