SETsquared alumnus, Inductosense, a Bristol scale-up company specialising in ultrasonic non-destructive testing, are the first to graduate from Unit DX after relocating to a new facility this month. The new 5000 sq ft site nearby in St Philips will allow Inductosense to increase their research and production capacities.

Our partner incubator, Unit DX, has played a key role in the growth of scientific enterprise in Bristol, and the incubator was able to support Inductosense from start-up to the next stage of their business journey. As part of its mission to grow the scientific ecosystem in Bristol, Unit DX will continue to foster engagement between its member and alumni company network.

CEO Dr Matt Butcher said, ‘Our story is a fantastic example of Bristol’s flourishing scientific start-up scene. We’ve benefited from the support of the city’s world-class incubators and dynamic community of scientists and entrepreneurs. Our new site enables us to continue to grow and we have some exciting opportunities in the pipeline.’

Inductosense’s technology was first developed at the University of Bristol, before spinning out in late 2015 with the support of the SETsquared ICURe programme. At the beginning of 2018, Unit DX was able to offer the company custom laboratory space and expert support, facilitating their growth as they more than doubled in size over twenty months. This year, Inductosense have secured over £2 million of investment, which has sustained their growth and expansion to a new site with more R&D and office space for employees. 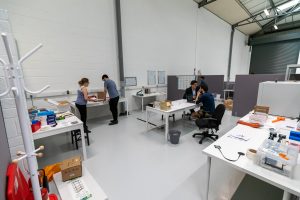 Inductosense develops novel battery-free wireless sensors to detect non-visible damage to structures such as pipes in the oil and gas, nuclear, and renewables industries. Their platform technology is compact and can be easily and permanently integrated into a structure, allowing for monitoring throughout its lifetime. The sensors reduce the time, cost and human error associated with conventional inspection techniques.

For more information about SETsquared Bristol news, sign up to receive the monthly newsletter.